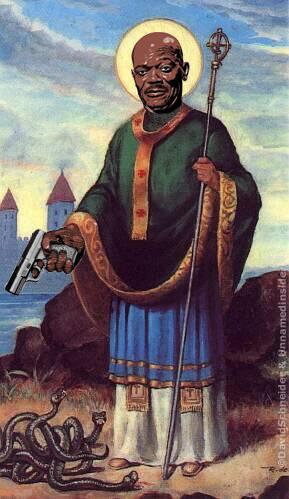 Since St. Patrick’s Day was yesterday, and I let out some crappy feelings, I made room in the grey matter for some pondering.  I’d like to laugh and note ALL of this is driven by the picture I used as the featured image yesterday.  I remembered back, in High School, I REALLY pissed my Dad off when I asserted that (as my poor Dad busted his ass to send me to Catholic School, costing thousands upon thousands of dollars…) Catholicism is nothing more than a pagan ritual disguised as Christianity.  I told him the whole thing was just robbing Pagan holidays, and it was a farce.  I was a very wise dickhead back in the day.

My intent wasn’t malevolent.  I was trying to say that I do not like how Catholicism tells me that, if I do not follow their rules implicitly, I will go to Hell.  That very notion drove me crazy.  In 13 years of Catholic School, it was drilled that sin = Hell, but God will forgive you through confession.  My devil’s advocate nature, though, could not handle the following: IF I miss Church on Sunday, don’t make it to confession, and get nailed by a truck and die, I go to Hell by default.  That blows.  The other problem, for me, was that I believed I was born bisexual.  (My bisexuality is probably a big part of why I dig Greek Mythology so much!) This led me to believe I’m inherently evil, which spurred a whole mess of issues as I grew.  Fun times!

The other big, big, BIG issue I have with a lot of religions is how women are portrayed. When I was Catholic, I was pissed I could never be a priest.  I thought it was bullshit, because I knew more of theology than most priests.  When I am told to study something, I do not take this lightly.  It’s my strength, and it is why I feel confident and assured in my very embracing concept of, “I literally give no fucks who or what you do, just love each other, it’s your calling”  I look at the spectrum of religion over history, and I see a constant change in the role of woman.  In Egyptian, Greek, Roman, Druid, etc. mythology, there are Goddesses.  The very creator of the Universe is GAIA, a Goddess!  With the rise of Christianity came the rise of mono-theology, a male God.  The Bible itself starts with Eve being responsible for human suffering.  That by eating the apple, as tempted by the serpent, we suffer original sin.

Here’s what has always confused me: why do people take metaphors literally? Further, in the United States, people are currently fighting non-stop about our Constitution being too old, too out of date, etc. yet there is seeming no hesitation to argue with folks about a book that is thousands of years old?  I’m not trying to rant or preach, I am literally asking questions.  I mean, the Bible is said to be divinely inspired writing.  I meditated before I wrote this, could this not potentially be divinely inspired?  What were the pre-requisites? Further, who proofread?  When the stories were being written, did everyone think they were madmen?  As Paul wrote letters, did people think he was bonkers? Seems to me that crazy and spiritual/religious are pretty synonymous too, eh?

Jung talks about Archetypes – the Mother, The Father, etc.  all just common terms and imagery that we all collectively know and understand.  To me, archetypes and symbology are interchangeable.  Christianity made the serpent evil, when previously, the serpent was a symbol of wisdom or rebirth/fertility, depending on who you are reading.  The apple, too, is a symbol of wisdom – the tree of knowledge.  The very concept of masculine and feminine are archetypes to describe qualities we all possess – aggression, emotion, knowledge, and so forth.

Am I to, then, understand that it was a sin for Eve to acquire knowledge and wisdom?  That we are all burdened with sin because a woman wanted wisdom?  The very story upturns all prior theology.  Gaia birthed the universe and Gods/Goddesses.  That all come from feminine.  Interesting. Depending on how you view the Bible, literal or metaphorical, shapes a hell of a perception of the world.  Is this maybe not a metaphor to help us understand that knowledge and understanding are separate?  It is one thing to know something, and it is very different to understand.  With knowledge, we have come to realize that we are separate from each other and whatever you believe is the divine, and we do not have the understanding of why.  Isn’t that a really pretty metaphor of human consciousness or nature? By whoever’s terms – Id/Ego/SuperEgo, etc. etc.

Snakes are all over history, and it is the oldest universal archetype.  They can symbolize healing, nature, and so forth, too.  When I think of a snake, as it correlates to Jung, I think of Maynard’s lyrics from Forty Six & 2…”My shadow…shedding skin..” Could this not mean that Eve, in listening to the “evil” serpent, was able to gain greater self knowledge, and begin a journey within?  The Buddha would be happy with that, Jesus (hell, his Mom is the “New Eve” right?) would be happy with that, yet it is told in a whisper down the lane fashion of “SIN!!!!!!” One of the most common images when serpents are called up is Medusa, right?  Medusa was actually a grandchild of Gaia.  Everyone seems to think Medusa was a bad chick, but the poor priestess was raped (or woo’d, depending on who you read) and cursed by Athena.  She got beheaded and used as protection from then on.  Medusa has always been used as a symbol of strength and protection – what is evil about that?  To me, then, Medusa’s curse by Athena, was also a blessing, it made her a powerful Goddess, even if that’s not how she thought it was supposed to be.  Isn’t that kind of what happened to Eve? Eve had to watch as her children (two men…) killed each other over God.  Crazy.

Eve came from Adam’s rib to keep him company.  Plato had discussed us all as hermaphrodites originally. Zeus split our souls in two as punishment. To me, then, the knowledge is that I am not whole, and that is the pain we all share.  Some say it is the pain of longing to return to God, some say it is the pain of knowing you are alone.  The snake of fertility/wisdom, then, tempted Eve to realize that without Adam, she was incomplete.  Hell, isn’t knowing another term for sex in the Bible?  What if the knowing was very simply Eve realized she should have sex with Adam?  She realized that, she too, is a Goddess in the sense that she can create life with Adam.  Medusa was punished for marrying Poseidon and forsaking her vow of celibacy to Athena.  Both went against God(dess)’ will and were both cursed and blessed, seemingly. Jung says that all humans seek divine, it is an inherent nature.  The problem is, seemingly, everyone gets hung up on what divine means – above? Below? Inside?  The other problem is, that we all seem to want to assert our x is better than your y.  That’s the fight we all seem to fight, and that seems to be the true sin or “evil”.

Moreover, do souls actually have gender? To me, what Plato and Adam and Eve are attempting to explain is very simply that your body is your body, and that is how you identify, but that does not reflect your soul.  That is the separation.  You see this pretty heavily nowadays.  It seems as though women are pushed to be everything to everyone, in a fight to assert that they are equal, while most religions assert they are not, and men assert that they are dominant or equal, while culture asserts that emotions are verboten.  I’ll rant about that another day, but suffice to say Equality and Equity are NOT THE SAME! AAAHH! It just seems to me that everyone is so heavily entrenched in their genitalia that they don’t seem to understand that we are all completely cool carrying masculine and feminine traits.  This, I think, is heightened by the loss of Goddesses in culture.  Or, more specifically, humans doing too much rule-making to assert dogma that their x is better than your y.  Cain and Abel, eh?

Let’s jump ahead and continents to Ireland.  Saint Brigid of Kildare is revered as a Bride (or Foster-Mother) of Christ.  It’s interesting that Brigid is also a Goddess.  Brigid is the Goddess of fertility, wisdom, poetry, etc.  It’s been proven a few times over that the story of Saint Patrick is not true; he did not drive any physical or metaphysical snakes from Ireland.   Druids have claimed that the story of St. Patrick is telling of him driving out paganism and instilling Christianity.  At the same time, Brigid is associated with snakes.  As a matter of fact, the US tradition of groundhog day is directly tied to the Goddess Brigid – it is celebrated on Feb 1st, and ushers in spring.  Saint Patrick is more of a metaphor, then a historical telling.  Either way, you see a Goddess become a servant of a God.  Brigid, too, was a tri-deity.  She was considered a trinity, like the Holy Trinity.  It seems more like the proliferation of the problem that women/femininity is a problem.  The divine feminine represents nurturing, wisdom, and emotions.  That these are qualities to be overcome in the name of … power? Yet, you then are not whole, because you effectively split your nature/self/soul.

Doesn’t that just suggest that maybe all of these stories are attempting to explain that, regardless of terminology, we all march to the same beat?  That God, Gods/Goddesses, and so forth are metaphors to explain that we are all one with each other, and it is our very mind that lies to say otherwise?  That our gift of knowledge is also our curse of knowledge?  Buddha speaks of duality, that we all struggle with this notion of good versus evil, and it keeps us tied from rising to our higher selves. Duality in the sense of man vs woman, instead of embracing (however you want to call it) qualities of Divine Feminine and Masculine?

It seems to me that everything ultimately comes back to one universal truth – Love.  The Higher Powers that separate seem to want us to fight and struggle, because in love, we can become our own Gods/Goddesses.  Alternatively, the Ego wants you to feel separate, because it thrives on Self.  In Catholicism, you become one with Christ, yet how is Christ one of three?  What is the Holy Spirit? Could that not be the soul?  The “original sin” wants us to stay knowing of the divide, maintaining separation, and fighting, because there is no understanding that without love, we cannot be whole.

If nothing else, I just have to pause on the fact that snakes are wisdom and they were driven out of Ireland, and then I look at how the holiday is currently celebrated. Seems to me that by driving the concept of Goddesses away, we’re left with a bit of a drunken mess.

14 thoughts on “Snakes on a Plain”